due to several complaints of "where are you in the photos" I have recently uploaded to one convient album nothing but pictures that include me. So here for your amusement is a vainglorious attempt at pleasing those with slower connections.

If you're only interested in pics of me, here ya go:
(Please note the 22lbs weight loss and the permanent smile on my face, hehehe) Brandy in China
Posted by Brandy at 8:06 PM No comments:

if you tried to call today, sorry!! I work mainly on the weekends and keep my phone on silent during class. Don't let that stop you from trying tho! I'm going thru a particuraly hard patch right now, what with christmas coming and all and I'd love to hear from you guys. It'd be really nice. HINT HINT! CALL ME!!! :)

Love you all, miss you bunches!!
Posted by Brandy at 10:37 PM No comments:

If you can make long distance calls for free you can now call me for free!!!

Now the hard part is catching me at home. ;)
Posted by Brandy at 3:01 PM No comments:

as promised, a video!

see more videos at my youtube site. the links have been updated over on the right side of the page.
enjoy this oh-so boring clip of james and I being interviewed on my friend Sandy's weekly EnglishRadio show at her college in Shenzen. 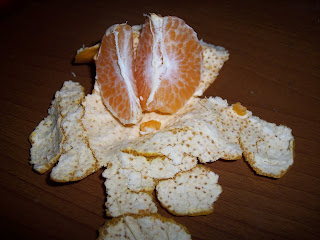 So since I've moved to China things have never been better... I think. I also think it's hard to judge such things. Now that I'm nearing the halfway point I think it's time to do a little self-assement.
Things I've Learned so Far:
Enough of the Chinese language to get myself IN trouble, not necessarriliy out of it.
That time doesn't ever stand still and seems to change paces depending on what I'm doing.
That most friends are superficial, but good ones aren't as hard to find as it seems.
People every where are basically the same.
I have two new addictions that I'm not sure I'll ever be able to shake.

Oranges and Being Popular.

Never particulary cared for oranges before... but here, so cheap, convient, easy, fresh, mmmmmm. I must eat at least 30/week. If I'm at home I can just sit and peel and watch movies for hours. mmmmm.
And the popular thing... well, I'm not sure exactly how to deal with it. I guess people liked me plenty enough back home, but I never really noticed. But here, it's astounding.. I'm like a rockstar. So I guess if I ever become a star I'll already know what it feels like.

But in other news I'm starting to feel the rift in myself again. The one that knows I should be more mature and more responsible and the one that says, but brandy you're only 23 there's plenty of time and you've always been so good. I'm pretty sure the only thing I've ever really been so good at, is just being lazy. I mean if I could just pin-point something, get excited or motivated, I KNOW i would be awesome. But I just can't. I don't know why. Fear of failure, perhaps? I don't think so. Because I know how to learn from my mistakes. I just recently rediscovered my inability to make important decisions. It's frustrating.

Also, not eating lunch is frustrating. So I'm going to go do that.
I'll leave you with promises of a new photo album from the new branch school that opened and some other random photos from a BBQ the teachers had.

Videos to come soon!
Love you and miss you all.
Posted by Brandy at 12:53 PM No comments: