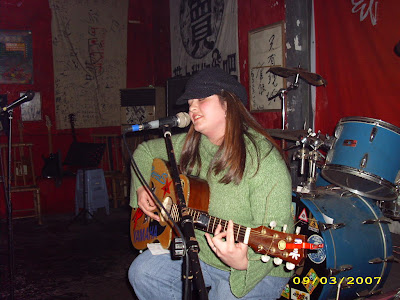 So it's offical... after hanging out at this one bar for way too long... I've been invited to be a permenant fixture on stage. Just think my name.. in lights... ok, my chinese name, and it's a chalkboard.. but whatever. It's my first job as a singer :)

I'm trying not to let all the compliments go to my head, I know I'm mediocre. But I figure playing 5 nights a week and practicing like mad at home.. I should get better. Up to a tolerable level. Now I have to work on my stage presence and learn more than 5 songs. I'm really excited though.

And well this is all pending on whether or not the owner decides to pay me in more than beer. All I'm really asking is taxi money. Ok, and one or two beers. But I'm going to quit drinking. Many reasons, A. I sing like shit. B. I'm getting fat again. C. I have to "save" face.

Also, I neglected to post about women's day. It's an international holiday (that apparently we don't celebrate in the US) where everyone empowers women. Woo hoo! So my school asked me to perform with all the foriegn teachers. They didn't really give me clear details about the event... so once the confusion settled, it turns out I played and spoke in chinese in front of Zhuhai's most influential women at this huge conference. Good times. They also took my picture for 2 of the newspapers in town. So that's why now when I walk into a grocery store they toss the paper at me. It's bizarre. My luck their were TV cameras as well. I'm one of the most high profile TPR teachers right now.

So my roommate is dying to get at his brand new work laptop. He just got a great job with lots of perks, but lots of work. I hope it makes him happier. 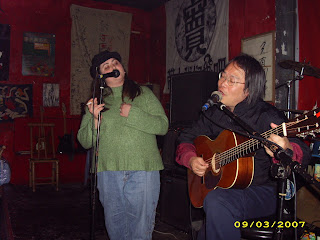 Things with the boyfriend are well. As far as I can tell... I mean the whole language barrier is starting to get to me. But I'm learning as fast as I can. I'm able to read more and more each day. I'm going to hire a private tutor for 2 hours a day as well. Someone to actually teach me, not just a chinese speaker. I have plenty of people to practice with. Every taxi driver, every security guard, basically people that can't go anywhere :) But I'm not good enough yet.

The next post will be more pictures, women's day, my boyfriend winning third place at a company party, and of the newspaper. Hope this satiates you until then.
Posted by Brandy at 11:40 PM 3 comments: