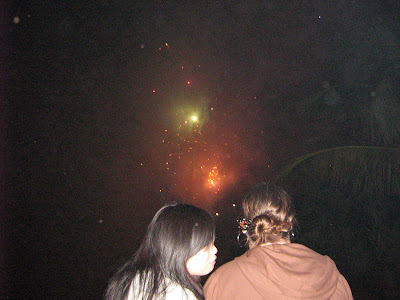 So here I am, my new year's vacation is almost over. And what have I done?

Learned a new song (well, the chorus) on guitar in chinese. See more about that here.

Studied lots of chinese. Went one day to Shenzen with Ashley to visit our friend Sandy. Met an interesting new friend of hers there named William. By far one of the most strange guys I've ever met (chinese or not) We all went shopping (I bought some jewelery and an egg timer)and then ate dinner. We found a nice little bar that reminded me of Live bar. (Except they wouldnt let me get on stage) One band rocked out on a version of Hey Jude. The singer was really great. Had I had the chance I would have definetly said so to him, but he took off right after his set. So we had a good time teaching William the dice game, and listening to good live music. We were headed to the hotel when Sandy recognized her friend's car outside a kareoke bar, so we went in and hung out with them for a while. Interesting people. Waste of space in my humble opinion, but maybe I was being a little harsh :) 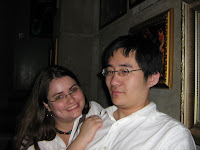 But it was an interesting time none-the-less. Because my sleep patterns have been totally messed up thanks to the holidays and one looooong night of playing Counter-Strike with my new group of geeky/computer game guys, I couldn't sleep until about 6. So I sat up having a nice conversation with the little hotel clerk. A little pimply-faced 19 year old boy. It was really neat to realize that if I'm speaking to someone with enough patience to try and understand my poor pronunciation and so-so grammar, that I can have actual conversations about things other than what food i want to order or which bar i want to go to :) Which is why I feel pretty good about my chinese at this stage... only 7 months now.

Oh, interesting note. I've been in Zhuhai too long ;) I've now had two taxi drivers remember me! One shouted out my name (Chinese one of course) from a crowd of taxis I was negotiating with. The other one, I hopped in with Ashley last night. As usual, I started my battery of questions and it wasn't long before he starting talking and he said "Actually I know you. You talked to me when you had only been here 3 months, your chinese is much better now" I laughed for a solid 10 minutes. So did Ashley once I translated.

So as pictured above. CN, Ashley and I got down by the sea on New Year's Eve to watch an amazing fireworks show. It was a little foggy and was hard to see the true beauty of the fireworks. I was dissapointed at first because there weren't many people around. Turns out, we just werent close enough. People were crowded around right underneath where HUGE fireworks were being launched. I kept waiting for the accident. So was an ambulance and a firetruck. Police were also scattered everywhere. I was also amused that people would stop staring up at fireworks to stare at me and Ashley, two foriegners in a strange place. Interesting to say the least... so I would say happy new years in chinese and watch them get suprised :)

Anything else interesting... hmmmm. That's really all I can think of right now. I'm going to put up more pictures. Probably tonight, maybe tomorrow. It's not like I've got a lot planned. 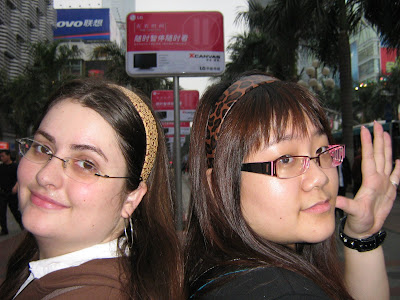 Here's one last picture of me and Sandy in Shenzen after shopping. Aren't we so cute?
The american Sandy and the Taiwanese Brandy. An interesting pair to say the least.
Posted by Brandy at 3:58 PM

To 2 meters from the river it was like we had been projects to you in the empty one of a new world, luminous how much wants, but blind while it is always come down piu giu. If we opened the eyes sott'acqua, for a moment, the sight became a veil, but all that one fascinated me ..... that one was the sea. The ocean
http://welkome-theocean.blogspot.com/